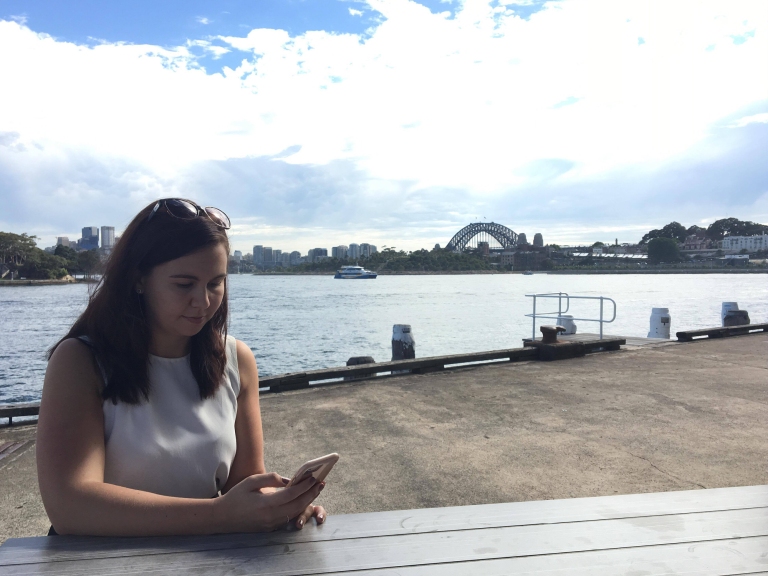 Kate and I worked together for a little over a year and I can tell you that we made an amazing team and loved collaborating together over that time.

Kate is a hard woman to catch, and it’s been a while in the making but I managed to sit down with her for a quick interview to ask her about the new role, the lessons she’s learned and if writing is as glamourous as Carrie Bradshaw made it out to be.

TELL US ABOUT YOUR CURRENT JOB AND HOW YOU GOT THERE?

I’m one of the online writers for Qantas Travel Insider [insert shameless website plug here]. My job involves writing and editing for the website and occasionally for the onboard magazine. I’ve recently started in this role after working as the magazine’s Creative Services Editor for 12 months. Prior to that, I was the senior feature writer at Prevention magazine for two years, writing about health, fitness, and nutrition, and before that I was a news journalist at the Illawarra Mercury newspaper, covering education, emergency services and pretty much anything that was thrown my way! I studied a combined Bachelor of Communications (Journalism)/ Bachelor of Arts (English Literature) at university and the media landscape has definitely changed a lot in the years since I graduated.

DID YOU ALWAYS WANT TO BE A WRITER?

I’ve always loved writing but haven’t always wanted to be a writer. At various times throughout high school, I wanted to be a marine biologist, an architect, a surgeon and a paediatrician. While any of those careers could have been great, in my final year of school I realised that what I really loved to do was to write and read and that I’d be crazy not to pursue a path where that was how I would spend my days.

WHAT ADVICE DO YOU HAVE FOR WRITERS?

To write every day. Whether that’s for work or a diary or a funny little story that’s been kicking around your head that you’ll never show to anyone. It’s the only way to keep getting better. Read widely – different styles, different topics, different formats. Absorbing as much as possible and seeing how other writers and journalists craft their stories will improve your own writing, too. And always get someone to proofread your work!

IF YOU COULD TELL YOUR YOUNGER WRITING SELF ANYTHING, WHAT WOULD IT BE?

Not to doubt yourself so much. Trust your instincts and don’t be too shy to show other people what you’re working on.

DO YOU BELIEVE IN WRITER’S BLOCK? IF SO, HOW DO YOU COPE WITH IT?

Definitely. It doesn’t happen all that often but it’s very frustrating when it does, given that my job is to write. I find mine usually stems from fretting about a piece not being perfect so I cope with it my just getting something – anything – down on the page. Or on the screen, as it were. Even if it is complete word vomit, it’s a start, and it helps get you into a flow.

WHAT LESSONS HAVE YOU LEARNED AS A WRITER?

The first draft of everything is usually pretty average so you should always leave ample time to edit and re-edit. It’s always better to triple- and quadruple-check every fact and every word you’re sure isn’t spelt correctly than realising you’ve made a mistake after a piece has already been published. And that perfectionism can be a good and a bad thing. Good in that it always means you’re aiming for your best and bad in that it’s the enemy of letting anything go. The trick is to find space in between.

IN A WORLD WHERE ANYONE CAN WRITE AND PUBLISH THEIR OWN WORK, WHAT ARE THE PET PEEVES YOU COME ACROSS REGULARLY?

Not checking off the basics. I am definitely guilty of silly typos but it’s frustrating when there are lots of grammar and spelling mistakes that could easily be picked up by a thorough spell check. Seeing obvious plagiarism is probably the biggest thing though. It’s so easy for people to lift other’s work online but it is completely unethical and illegal. If you don’t have something new or fresh to add, whether that’s a well-thought-out opinion or new facts, don’t bother.

WORKING IN MAGAZINE PUBLISHING, IS YOUR LIFE AS GLAMOROUS AS CHARACTERS LIKE CARRIE BRADSHAW, MAKE IT OUT TO BE?

You couldn’t help but wonder, right? But no, definitely not. There’s definitely a glamorous side to it all and the fact that I get to spend my days writing and working with extremely talented people is awesome but there is so much hard work and long hours that go into putting out a magazine every month and a website every day. And no one is getting paid $4.50 a word to write for Vogue.

WHAT’S IN STORE FOR KATE IN THE FUTURE?

My work goals are constantly changing but in an ever-changing industry, I’m reluctant to set my sights on any particular dream job. As long as I get to keep writing for great publications, working with and learning from great people, then I’m happy.

FAVOURITE PLACE TO EAT IN SYDNEY: Little Shenkin in Randwick. There are a few Shenkin cafes scattered around Sydney but this one is my favourite because it only seats about 10 people and their breakfast menu is unlike the usual brunch fare you get in the eastern suburbs.
FAVOURITE BAR: The Royal Hotel in Paddington. I’m not really a bar person but they have a great rooftop space if you can snag a seat.
FAVOURITE SPOT IN SYDNEY: Yarra Bay. It’s a bit of a journey to get there – including a drive through a cemetery – but the beach rarely has more than a handful of people on it, it’s relatively calm and in summer the Munchies Afloat boat sells ice-creams from the water!
WHAT ARE YOU LISTENING TO: Podcasts! I always have several on the go but right now I’m loving Where Should We Begin? with Ester Perel and The High Low.
THE LAST BOOK YOU READ: Light and Shadow: Memoirs of a Spy’s Son by Mark Colvin
YOUR LIFE MOTTO: Control the controllables. I stole it from my psychologist husband – it means you can only control the effort that you put in, not how other people react. As long as you have given something your all, that’s all you can do.

Tell Your Friends About Me:

View all posts by dominiquemargaret

Donate to help me keep writing!

You can contribute to help keep the blog alive.